Wollongong Monopoly is here with Convoy as Community Chest 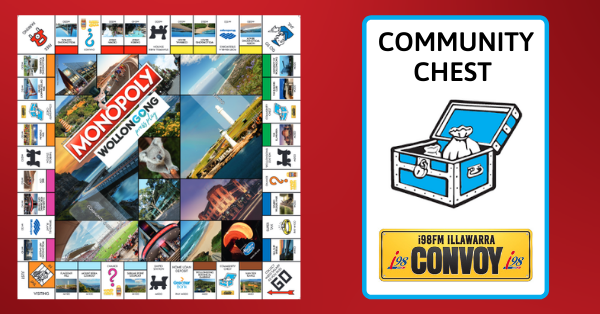 After much anticipation, the official Wollongong MONOPOLY board launches today.

Locals and tourists alike can now play the world’s most popular board game in a way that immortalises The Gong and its landmarks.

Over the past few months thousands of people and businesses have had their say, and after much deliberation, the locally themed properties selected that will make the entire game a truly local experience are:

The public are invited to meet Mr Monopoly, throw the dice on the giant Wollongong Monopoly board, and get their hands on one of the first boards from 3.30PM at Wollongong Central today.

Dale Hackett, representative from Winning Moves (the makers of licensed Monopoly editions) said: “This edition will be everything you love about the traditional board, adapted in a way that the citizens of Wollongong requested. We’re grateful for everyone who had their say about what they wanted to see on this board, and we hope it’s one that local families will enjoy for generations to come.”

The MONOPOLY game first hit the shelves in 1935 – since then it has been played by more than 1 billion people. Today, it is played in 114 countries and enjoyed in over 47 different languages.