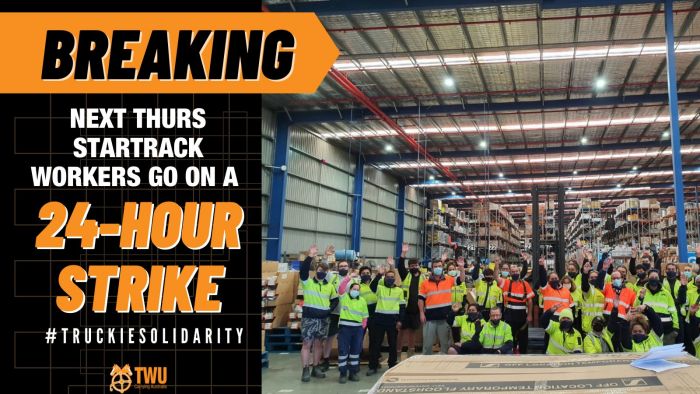 StarTrack workers angry over the companies’ refusal to provide job security guarantees will hold a 24-hour strike on Thursday after the company knocked back invitations for an urgent negotiation meeting to take place this week.

Last week a ballot closed with a 90% endorsement of strikes, giving around 2,000 StarTrack union members – roughly 70% of the workforce – protection to go on strike.

The TWU wrote to StarTrack on Monday to call crisis talks and again outlined the specific job security guarantees workers need. The company declined to meet this week and failed to respond to workers’ demands.

The job security battle follows a ramping up in the outsourcing of work to rates as high as 70% at some StarTrack yards, starving employees of overtime and threatening their jobs in the future.

In response, workers are seeking guarantees in their enterprise agreement including the same pay and conditions for labour hire workers as employees, caps on the use of outside hire and commitments to offer all available hours to employees before contracting out.

“StarTrack has deliberately and repeatedly created unreasonable delays to resolve the job security concerns of its workforce. For months now, the workers sweating it out in trucks and distribution centres to meet extreme demand have been battling behind the scenes to protect their jobs against an insurgence of outsourcing to lower paid workers.

“The company turned a deaf ear to the considerable warning of workers who strongly endorsed action last week and then called for crisis talks to prevent the need for strikes.

“We know the Australian community expects more from government-owned Australia Post than for hardworking people’s jobs to be on the line when demand and revenues are through the roof.

“It is no coincidence that jobs and standards are being driven down across the major transport operators. Thanks to government inaction, Australia is facing the double-edged sword of ‘The Amazon Effect’. Supply chains are wrung dry by cost cutting by wealthy retailers while operators are forced to compete with exploitative AmazonFlex. This would all be solved by an independent tribunal to set minimum protections for workers,” he said.

Yesterday, StarTrack called NSW police to block a union official with a legal right of entry permit from entering a site before being instructed by Comcare to allow access under health and safety laws. The official was then shut in a room for five hours before being able to inspect the site.

The TWU recently launched legal action against StarTrack and labour hire company APS Transport over the sacking of a worker undergoing breast cancer treatment after she questioned a pay cut. The email response she received from APS said StarTrack had instructed the return to Award conditions for labour hire workers.

Job security guarantees are being sought by thousands of workers at major transport operators to defend against a push to compete with exploitative business models like AmazonFlex by slashing labour costs and outsourcing work.

A FedEx protected action ballot will close at 5pm today with over 70% of members already confirmed to have voted, while ballots at Bevchain and Linfox close on Monday and Tuesday respectively.

Negotiations are ongoing at Toll and Toll Global Express – now owned by Allegro – following a 24-hour strike by thousands of workers last month.

- Of the 70% of members who voted in the StarTrack ballot, 90% endorsed strike action. Every TWU member at StarTrack now has protection under the Fair Work Act to go on strike.
- The TWU has never and will never disrupt medical or vaccine supplies through strike action and, just like at the recent Toll strike, provisions will be made to ensure the transport of these supplies continues.
- Australia Post, which owns StarTrack, recently reported record revenue of $8.27 billion and before tax profit of over $100 million. StarTrack is the most profitable arm with volumes increasing 12% in the last year.
- Australia Post previously confirmed to the Senate that $28.2 million worth of bonuses was paid to 345 employees on incomes over $200,000 in the 2019-20 financial year.