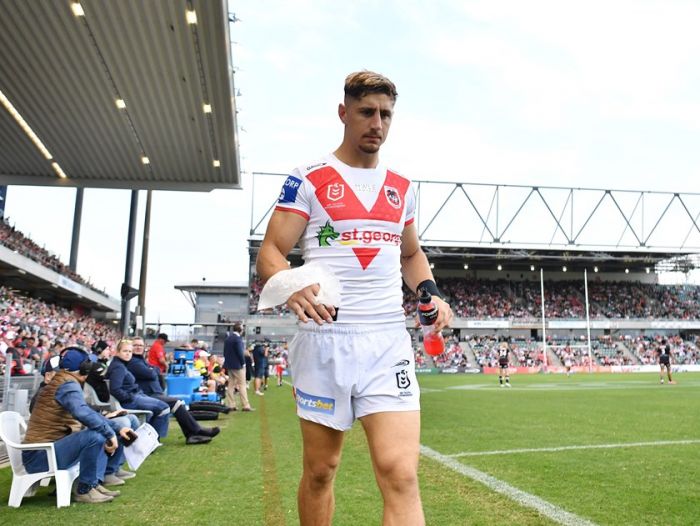 Zac Lomax's State of Origin hopes are in serious doubt with St George Illawarra officials fearing he has broken his thumb, adding further to the NRL club's backline woes.

Lomax lasted just 19 minutes in the Dragons' 16-8 loss to Wests Tigers, after copping friendly fire when he connected with Josh Kerr's head in defence.

The blow immediately dislocated his right thumb, and while he tried to play on he was forced from the field.

The Dragons are unsure if he has sustained further tendon damage or if the bone is broken, with the centre sent for scans on Sunday night.

His latest injury will hurt the 21-year-old's chance of pushing his case for a spot at right centre for with only four games before Origin teams are named.

"They've got to have a look at it. There was a dislocation there, there not sure if there was any other damage," coach Anthony Griffin said.

"They'll get him straight off for scans and the specialist in the morning.

"I'm more worried about him playing for us, not for NSW at the moment."

The Dragons also lost Cody Ramsey to a suspected broken rib in the second half on Sunday.

Regular wingers Mikaele Ravalawa and Jordan Pereira remain suspended for next week, while Brayden Wiliame is out with a calf injury.

It could prompt the inclusion of Mathew Feagai against Canterbury next Sunday, after his twin brother Max started his first game of the season on the right wing against the Tigers.

"You don't need to be an outside back on our list at the moment," Griffin said.

"We're going to have to go deep into our list and look at our options."

The loss marked the Dragons' third in a row, after they started the season with four wins in their opening five games.

But Griffin insists it is not panic stations, after they simply struggled to get out of their own end in the second half on Sunday.

"In general we didn't do what we needed with the ball. But we hung in there and patched it up for the night," Griffin said.

"I can't fault their effort, they keep turning up defensively.

"You've got to give some credit to the Tigers, that's probably the best game they've played all year."